Participating in the commons

What is a hackerspace;

A hackerspace (also referred to as a hacklab, makerspace, or hackspace) is a community-operated workspace where people with common interests, often in computers, technology, science, digital art or electronic art, can meet, socialize and/or collaborate. [https://en.wikipedia.org/wiki/Hackerspace]

More specifically at labaki – hackerspace of Heraklion they say:

“When the philosophy of open source goes from the hard disk to the material world and combined with imagination, collaboration, interaction and appetite for creation then comes the LABaki to make it happenAgainst a background of consumerism , we learn to create our own (DIY), reusing what society considers garbage. Eager to explore in the spirit of the hacker, analyze existing systems for maximum utilization of all abilities and their direct application to everyday problems. LABaki becomes a common meeting place for those who want to share their ideas to in each expression of technology and beyond. Cooperate on them and produce things open to all.”

respectively the hackerspace of Athens state its vision:

Be polite to everyone. Respect all people that you meet at the space, as well as the space itself.

The main operation of hackerspace is to promote collaboration by sharing projects, code, and ideas. The motto, which is inspired by Creative Commons, is “I love to share”.

All decisions are the result of consensus among members. Decisions on management of the space are taken at the monthly meetings, which are open to all.

You do not need a license to work on a project. If you want to organize an event or a workshop on an Open-Source or Open-Hardware project, do not expect it to be organized by someone else. Take the initiative and do it! “

Offering an open space with tools and people with useful ideas and the freedom to allow everyone to work on whatever interests them, from making a table to writing code, from setting up a network to hacking your phone, from building a 3d printer and print! Basic principles are openness, freedom to knowledge and access. 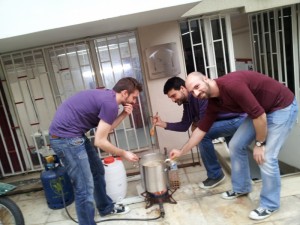 How does it operate?

Each hackerspace community is autonomous and self-organized so defines and follows its own rules of operation. Normally however participation is open and free. Some places offer subscriptions as a way to cover fixed costs, with members acquiring some privileges. Also generally the communities take decisions in meetings and using online tools.

What does it have to offer to me?

Starting with access to tools, to repair or build something you need from a PC to a furniture.

People with whom you can collaborate to learn and do things, from installing linux on your computer, making a 3D printer, a solar oven and whatever else might interest you or others in the community.

Generally to learn more and to share your knowledge about programming, electronics, networks and machinery.

Also to work in research and innovative international projects.

Indicative in hackerspaces, projects that run range from hydroponic to astronomy, from linux coding to unmanned underwater robots and from solar ovens to 3D printers! Imagination and will and it can be done!

What all these have to do with Commonsfest?

The hackerspaces are common spaces, sharing, managing and developing based on common goods. Usually operating based on peer-to-peer collaboration and make their knowledge freely available to the rest of the world using the internet. They are a very good example of how we can cooperate, use and produce common goods for the benefit of the commons, that is all of us! This is where the philosophy, that most of the participants share within these communities, of free and open source software or hardware or the DIY makers movement helps.

How many hackerspaces exist and where?

In Greece at this moment we know of 6 places:

Get to know your local hackerspace. If it does not exist then don’t wait… Share the idea with friends, promote it on social media and other communities at your area and create one!

For more hackerspaces around the world see here: http://hackerspaces.org

The images used are under Creative Commons licenses.

One thought on “hackerspaces – Open, collaborative and free innovation”