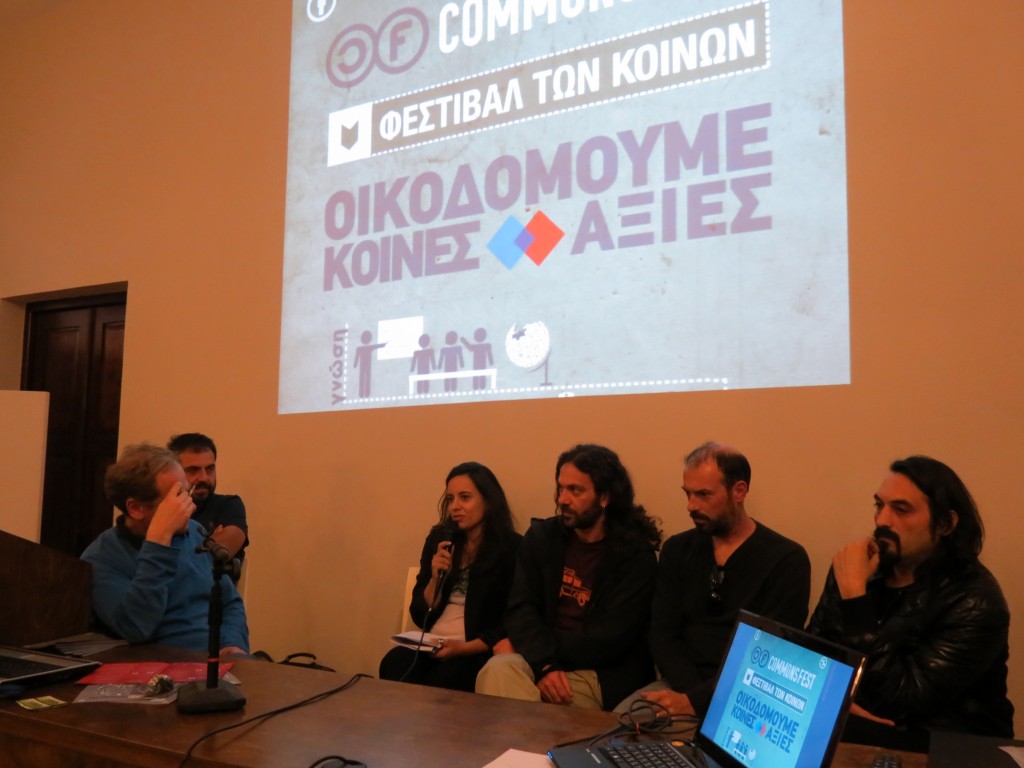 CommonsFest was held for the second consecutive year in Heraklion, Crete on May 9th ,10th  and 11th. In this celebration of collaboration, solidarity and sharing took part members from eco-communities, natural farmers, seed preservationists, cooperatives and solidarity economy productive ventures and associates, participants of free software and digital rights fighters, members of community-run open wireless networks, lawyers, sociologists and political economists, scientists and academics, social activists and ordinary citizens interested in the sustainable management of the Commons.

This year’s program, which was formed after then open call, included 24 talks, 9 workshops, an exhibition and a first meeting of the participating teams on building a coalition for the Commons.

Through presentations, discussions and workshops, it became clear that the Commons establish a sphere of organizing human activity characterized by the ability of people to manage resources within a framework of collective relationships and arrangements, and aimed at fair and equitable benefits from management of shared resources through the widest possible participation and self-government.

Individuals and groups from different origins and running different projects met in searching:

– To meet basic human needs such as education, health and universal access to food, water, seeds, housing, transport and communication

– Safeguarding the Commons and the natural environment to ensure their sustainability

– Access to information and human knowledge recognizing them as fundamental human rights, for the sake of these basic premise is universal citizens’ access to Internet and to combat digital illiteracy

– Efforts to reform patent law to release creativity, accelerate progress and equitable distribution to benefit the whole of humanity

– The fact that the cultural content, scientific knowledge and data generated by the public sector and financed by the whole of society through taxation, should be common wealth, freely accessible to citizens

– The use of free software in all public and private infrastructure, the openly designed telecommunication equipment, wireless community networks, free/open broadband, including the release of areas of radio spectrum for sharing and avoiding the risk the internet to be a medium of universal surveillance

The combination of the above can be a comprehensive proposal for decentralized organizational models of local communities, which will help their members to devise their own institutions for sustainable management of natural resources as Common goods through the reformulation of a quality that had always been, but forgot the last years: the ability to create and to share this knowledge creation.

But the most important part of the festival was the presence of the participants, which turned the organizational difficulties of this effort into a real celebration, a promise that our needs can be a process of togetherness, a process of inspiration and creativity in a world where if there was not for the concept of cooperation there would be no life.

We would like to say a big thank you to all those who have inspired us to perform CommonsFest.

The festival would not exist if there were not for:

And finally the millions of people who dream of a more just and better future.