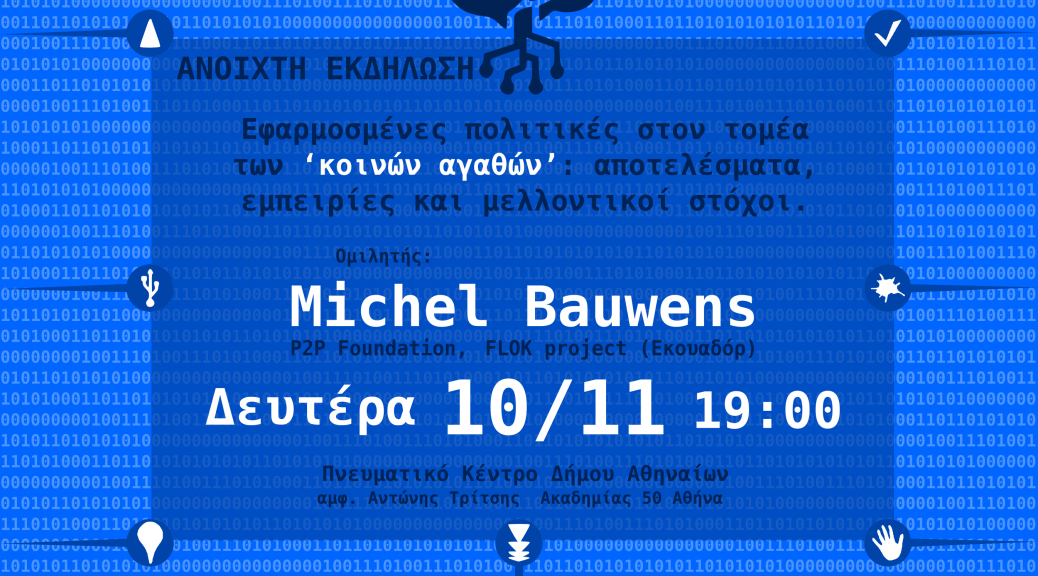 In recent years, a highly dynamic global movement for Commons emerges in many different areas. Claims to redefine definitions in economic and biopolitical level, challenging the neo-liberal economic and political order. The debate on the Commons has a driving force, among others, to seek for a way outside the state and the market that will lead to an alternative and sustainable future. The activity around ‘Commons’ is strong in Greece: on research projects, workshops, festivals with exclusive focus on ideas and values that follow this tradition, but also practical applications across the country by number of groups operating self-organized and by taking initiatives. The culture of the Commons, which has its roots in the open source and open data communities is constantly expanding to more and more aspects of daily life (with initiatives ranging from open knowledge to health and sustainable agriculture).

As part of this two-year research preoccupation Nicos Poulantzas Institute with the theme of ‘commons’ – with emphasis on water management and then the digital commons – the speech of M. Bauwens aims to describe the overall picture of what is happening today in this ever-expanding field internationally. Particular emphasis will be placed on the importance of ‘new Commons‘ as the basis of a new political economy beyond the state and the market, and the prerequisite strategies, alliances and priorities. These will be combined with the presentation of the results of FLOK project recently completed in Ecuador and is the first attempt to produce, at government level, proposals of applied policies and strategies in transitioning to ‘commons’. Finally, extensive reference will be made to peer production (P2P modes of production) and the success stories in this sector and the institutional conditions necessary in order for this example to generalize and be protected from the capitalist framework in which it grows today.

Michele Bauwens is founder of the P2P Foundation and works with a global network of researchers concerned with the peer production, management and ownership. It is co-founder of Commons Strategies Group which coordinates initiatives at international level on the ‘economy of Commons‘. At the same time, he works as a researcher with the University of Amsterdam concerning the anthropology of the digital age and has edited the production and publication of relevant books and documentaries. He has worked as a research consultant to numerous public and private sector organizations. The Ecuadorian government gave him the position of Director of the research program (FLOK project) concerning the transition to the ‘knowledge economy’, which was recently completed.