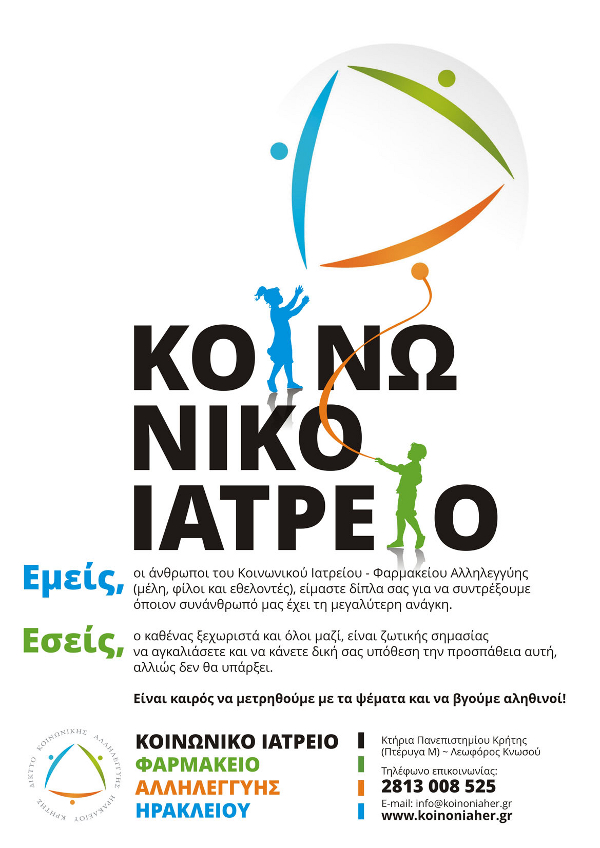 The Social Solidarity Network of Heraklion was initially started by a small group of citizens that shared a common speculation about the current humanitarian crisis and the uncovered sanitarian needs concerning a large number of the city’s population, which developed due to the political choices of the governors. In February 2012, the group legally formed a club, its primary goal being the immediate motivation of its members, that were growing in numbers, towards the coordination of actions that would lead to the operation of a first degree health organisation, by citizens and for the citizens, without state interference. So, in March 2012 the Social Infirmary and the Solidarity Pharmacy were established. This action brings out the common ethical obligation of all the participating people and their supporters, to express their solidarity towards fellow men and women that, due to unemployment and poverty, have been unable to provide for themselves and their families and do not have access to basic health care. The primary goal of covering the sanitarian needs of those that have been shut out of the health care system is supplemented by the effort to create bonds that will boost their self confidence and take them off social isolation.

The Social Infirmary/Solidarity Pharmacy considers Public Health to be an utmost social possession, which the State is constitutionally obliged to guard and promote.

However, we live in the era where health as a common possession is being completely disdained, since through its conversion to a marketable commodity it is becoming a personal affair: the health care level one can ensure for oneself is connected to one’s purchasing power. The state’s role is to offer, not the public health services that would benefit society as a whole, but those that are imposed by a cynical, logistic way of administration, that serves only the markets. This way we are being led to a social Darwinism, in which we are asked to accept the survival of the financially strongest when the financially weaker are “inevitably” led to pauperization and extinction.

We are resisting the “market hybris” that ignores the inauspicious health indicators and the number of suicides, which are constantly on the rise (as documented in respected scientific magazines, for example the February 2014 issue of Lancet), by acting in solidarity, the mutual help among compeer people. Our vision is a society whose members, regardless of their special characteristics, have equal and universal access to public health care of all degrees. We wish to recommend a health care model that reinforces prolepsis and health education and uses drug-based treatment on a logical basis. Most of all, we share a common vision for a society that is not a passive receiver of whatever is decided on top, but a society of active citizens that are able to form an opinion and take part in decision making for common goods. With our action in S.I./S.P.H. we prove that are societies indeed have such a dynamic, which is based on the will of the citizens themselves to take responsibility and serve common human needs, without any kind of interests except those that serve them and only them.

S.I./S.P. Heraklion is an independent first degree health care structure that functions only thanks to volunteer effort and the support – financial and material – of the citizens of Heraklion. Self organization and self administration are its defining elements. It is based, on lent, at the M wing of the University of Crete Campus in Knossos avenue. The infirmaries are ordinal and can be visited by anyone in need by calling 2813008525, Monday to Friday 10-12 a.m. Departments currently in operation: pediatric, pathological, gynecologist, dentist, eye clinic, psychiatric/pshycological support. A network of laboratory and clinical specialties is also collaborating to cover the patients’ needs.