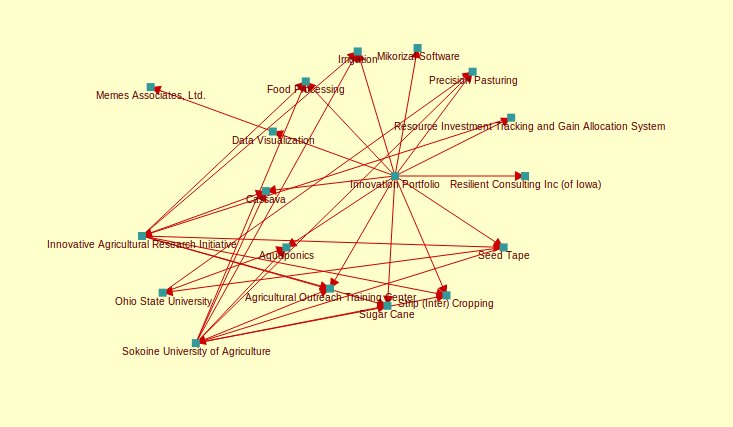 In the context of the pre-festival event of the Festival of the Commons which will be held in Heraklion on April 17-18, we asked our invited speakers to write a short article about their areas of activity and expertise.

The first of those articles is “Open Value Networks and Commons-based Peer Production” by Apostolis Xekoukoulotakis, scheduled to speak on Saturday 18 April.

With the advent of the computer and the internet, we are able to communicate and coordinate with an increasing number of people. That has allowed new possibilities in the organizational forms of production that were never possible before.

One such form is the Commons-based peer production. It is characterized by the fact that resources are shared ,as commons, and that the participants of such production take roles according to their skills and interests and not based on hierarchical structures of governance.

This organizational form of production has many advantages that makes us want to foster it.

From an economic point of view, the fact that resources are shared reduces the production and development costs of products for society and thus it increases the pace of innovation. Moreover, it allows a great number of people to participate in it and can draw resources from many sources. That gives the ability to those that participate in such a production to be competitive to big enterprises that have huge capital resources.

From an ethical point of view, Commons-based peer production allows any person to lead or decide about a project as long as he/she has the skill or interest. Decisions are based on merit , not based on hierarchy. At the same time, people are treated equitably when it comes to compensation of their work.

For the above advantages, the OVN model is trying to foster this form of production. First proposed, developed and implemented by SENSORICA, it was further developed by many other people. The OVN model uses the current advent in communication technologies and software methods of accounting to do that.

The OVN model is a model of production in which we have radical transparency and radical openness.

What does radical transparency mean?

The economy currently works with the collaboration of multiple process around the world that coordinate their efforts to produce products.

At the same time each production process has a wealth of information about its functioning that is kept away from the public eye.

The OVN model proposes that each production process publishes all information about its internal functioning. That allows production methods to be copied. Provides accountability. Public view allows people to propose better solutions and to detect errors sooner. Moreover, ecological and other externalities are easily Identifiable.

The OVN model also proposes that information about the supply chains be also visible. All production processes should provide information about their product and the requirements they have in tools, materials and human resources as well as the current suppliers and customers.

The ability to search and analyze these data allows for different groups that were otherwise isolated and small to interconnect. This has the profound advantage that these small groups can cooperate, coproduce value and thus be able to compete with traditional companies with a higher number of capital assets.  Moreover the information about the supply chains allows people to suggest more efficient  supply chains and at the same time bypass the supply chain middlemen entirely.

What does radical openness mean?

Radical openness means that any person is able to join a production process. The only constrains  are there to protect the shared resources, the commons. This has a profound effect on the way the production process works.

From an economic point of view, radical openness and radical transparency allows engagement to the production processes by a great number of people that can produce value in amounts that could have never before being conceived(wikipedia, wikispeed).

From an ethical point of view, the production process tries to maximize product value rather than profits. At the same time revenue is distributed to a greater number of people. Because everyone is free to join and cocreate value, in an open and democratic way, people love to work, they work on things they like or are good at.

The people that work on these tools form a network too. Each with his own point of view, our software complement each other. You can find a review of the tools we have already built or are building in the following sections.

The legal structure of the processes that take part in an OVN is still debatable. We are experimenting with a specific form of legal structure in which we try to achieve the below goals.

To achieve that, we propose to split a production/research process to a number of legal forms, to distribute some responsibilities to them so that the process can function while at the same time having no real control over the process. We propose the existence of 2 legal forms.

A custodian that is given control of the resources that the project has.It has the responsibility to coordinate the access to those resources according to predefined rules without discrimination and to as many people as possible while at the same time protecting them. The custodian is not allowed to make a profit, its only role is to help the commons based peer production flourish.

It is important to note that the participants do not belong in any of those legal structures. They have their own informal form of organization and without them, none of the above legal structures can function.

Moreover, since all the earnings go directly to the contributors, there is no need for a structure that would need to decide on how to spend the profits. The distribution of revenue ,at the same time, achieves the distribution of investment decision making.

The next two sections describe groups/projects that are using the OVN model as well as the software that is used by them. They have been written in collaboration with the 2 programmers of the software, Bob Haugen, Lynn Foster as well as Tiberius Brastaviceanu, one of the founders of Sensorica.

Peer production has been recognized mostly in the domain of open source software. But now, OVNs for producing material goods are emerging.

Sensorica, in Montreal Canada, is the pioneer, developing the organizational patterns and production and financial practices that can make such OVNs work.

Here is the short version of their extensive project list:

Food networks to aggregate and distribute food from many farmers to many customers have been sprouting up around the world. They are not exactly the same as Open Value Networks: they tend more to organize as cooperatives. But they share a lot of the same patterns.

Here’s one from New England in the US:

Another food-oriented cooperative network is being formed among fishing boats in Nova Scotia, Canada: 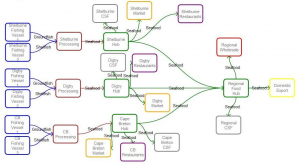 And here is the Tanzanian agricultural innovation network, modeled after Sensorica: 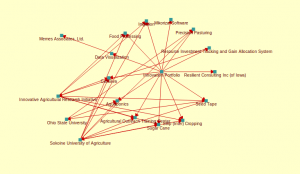 OVNs like these offer the potential for a full Commons-based peer production economy.

OVNs are different from other business forms, and the software created for other business forms does not fit them very well, but neither does any other kind of software. The usual business software assumes corporations, not networks. And assumes hierarchical management, not peers. But social network software does not handle the production and economic relationships of OVNs.

New software is emerging designed for OVNs producing material goods. One such application is Network Resource Planning (NRP), which is ERP (Enterprise Resource Planning) for networks.  NRP is being developed by a collaboration between Sensorica (described above), and some open-source software developers who have experience in “lean manufacturing” supply chains (http://mikorizal.org).

This is operational software, for running an open value network as an economic organization. It logs contributions, coordinates work, and distributes income to contributors. It also does multi-party accounting: that is, accounting reports for each participating person and organization, covering their activities within the network. It does not do ecommerce or social networking.

Here is the basic functionality: 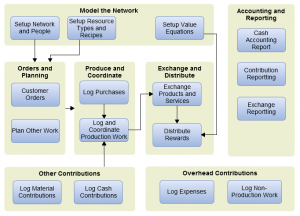 A server running this software is available for the April 17 CommonsFest event for participants to try. (It is actually available now, for organizers and different groups to try before the event.) The website URL is http://commons.webfactional.com.

The software at this stage does not offer self-signup (working on that for April 17). So for now, please send an email to info@mikorizal.org and they will set you up with login credentials and explain how you can create login credentials for other people.

Be gentle. The software is still young, a bit crude, and unfinished. It does work, however, and is being used extensively by at least one OVN now, with more getting started. The software is also not yet translated into Greek. However, the system is designed to be translatable, and since it is open source, if there is enough interest, a free account at https://www.transifex.com/ can be set up to do the translation using Commons-oriented peer production! (And of course any other desired improvements can be accomplished using that same mode of production.)

The following sections describe other projects and tools.

Ryaki is the project that the main author of this article is working on.  Ryaki wants to build tools to achieve 2 goals.

The second goal is to help OVN find financial capital. Since we will never be able to acquire perfect information that would eliminate investment risk, the existence of risk also introduces risk aversion by poor people and thus a dependency of production from rich people. Ryaki is a restricted ripple network that is closer to the production process and can provide cheap capital to OVN.

A site describing it: www.ryaki.org

Wezer is ERP (Enterprise Resource Planning) for non enterprises.  It is a distribution of Odoo (ex Open ERP), containing a set of integrable Odoo modules designed for P2P actions.

Each community can determine its appropriate package.

Wezer contains the functionalities to be organized as a P2P organization:

This is a collaborative project among several people and organizations who are all working on some aspect of software for open value networks. The goal is to agree on a common vocabulary by means of which all of these applications can work together to fulfill the needs of networks of open value networks.

One thought on “Open Value Networks”