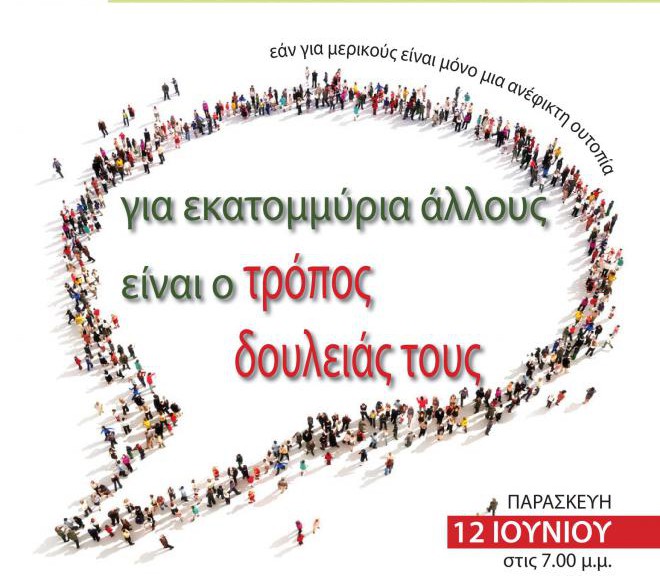 “If for many it is only a utopia, an ever-receding horizon of hope, for millions of others solidarity economy is a way of working, producing, commercialising, consuming and exchanging values. It is a way of satisfying individual and personal needs in the interest of the welfare of all. It is the material base of the network revolution.” E.M

According to the Federal University of Pelotas, in 2014 1.5 million Brazilians are working, full or part time, in 19,708 cooperatives of the solidarity economy. The significant growth of solidarity economy initiatives and social movements during the 1990s coincides with the enormous economic and social consequences of the debt crisis that the country faced. In 2002, Lula’s government significantly strengthens employment and invests in social policies, resulting in the weakening of solidarity economy as an alternative way-out. Since 2010, with social inequalities persisting, this socio-economic movement is regrouping, getting better organized and fights not only for policy change but also for a radical design of a new economic model.

Images from the future?

On Friday 12 June, at 19:00, at the garden of the Greek Archeologists Union (Ermou 134, Athens) we will be discussing with Euclides André Mance on the experience of Brazil and the rest of Latin America, the need to develop cooperative networks and the economy of liberation. After the talk, we will continue with music and Brazilian cocktails.

Euclides André Mance is a Brazilian philosopher, one of the main theorists of solidarity economy and philosophy of liberation in Latin America. He worked as popular educator in the 90s and has authored many articles and books, such as “The Revolution of the Networks”, in which he examines how solidarity and cooperative networks could form connections that could drive economy, politics and culture towards building the material base for new, post-capitalist societies.

In this latest book, “Constellation Solidarius” (Dec 2008), Mance deals with the systemic ruptures of capitalism and describes how we can take advantage of them under the logic of solidarity economy.

Since 1999 he supports the creation of solidarity networks and is a member of Brazil’s Peoples Network of Solidarity Economy and of Solidarius.